Mark Moran, editor of Parking Review and chair of the judging panel, said: “With winners selected by a jury of their peers, the British Parking Parking Awards logo and trophy have become a respected and coveted mark of excellence among parking professionals.” 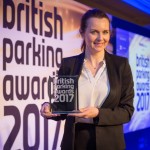 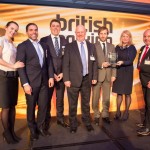 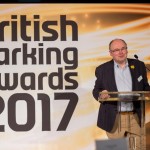 Tendering the car park Norwich City Council’s goal was to not just park cars on multiple levels, but to develop the Mountergate Area site into a landmark that would signify the start of the redevelopment of this entire part of the city. NCC awarded the contract to design and build the new facility to HUBER car park systems international, one of the European leaders in the multi-storey car park construction segment.  With a background of more than 25 years in the car parking industry in Germany, HUBER has been supplying car parks to the international market since 2008.

HUBER’s very own architects expertly designed the car park as a state-of-the-art facility and permission to build was granted in January 2015.  After demolishing existing buildings, ground decontamination works and an archaeological assessment HUBER started construction in the summer of 2015.

The most impressive component of the car park is the stunning exterior cladding which adorns car park and office facilities. Its design is based on the idea of creating a true corner stone; a corner stone that would relate to the height of its surrounding buildings but would also stand out with its striking architecture.  The idea of a corner stone quickly developed into a corner jewel that would sparkle from its inner core and relate to its surroundings not only at daytime but also at night.  Whereas the area around Rose Lane turns into Norwich’s vibrant club and party scene at night, the sparkling HUBER car park with its custom-made perforation sits right in the middle of it.

Thanks to the sophisticated illumination scheme the yellow wall elements of the office unit become visible at night.  The impressive air permeable façade is made from perforated powder coated steel panels.  Several different patterns were meticulously arranged by the architects to create an illusion of random sparkles.  As additional eye-catcher the panels were installed in varying depths to create a textured surface. 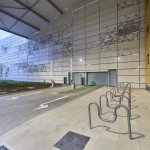 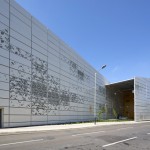 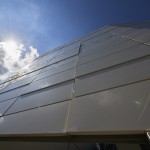 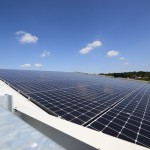 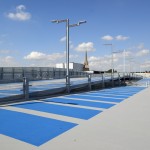 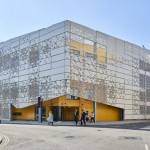 The building complex was split into two building units: a car park and an office building.  For technical reasons HUBER decided to keep all functions of the new buildings separate from each other.

The car park was erected using HUBER systemized components and features 595 spaces.  Parking bays and traffic areas benefit from the clear-span composite system.  Fire walls towards adjacent buildings comply with fire safety regulations.  A special coating system protects all trafficked surfaces.  The space-efficient VCM system facilitates efficient and safe circulation while two entrance and exit lanes set apart from each other avoid excessive queuing in the adjoining roads.  Entrances and exits have been fitted with electrical roller shutters.  All   parking bays and stairwells are colour-coded to ease recognition.  The parking bays have a comfortable width and along with disabled parking bays and secure bicycle lock-ups these features enhance acceptance of the car park.  A CCTV system has been added for security reasons.  The car park is equipped with high-end LED lighting which provides uniform illumination; there are also several E-vehicle charging stations.  An 80 kWp photovoltaic plant on top of the 530 m² roof generates more energy on a sunny day than the car park needs for itself.

NCC designated the ground floor of the office building as parking attendants’ office.  It sits right next to the car park with a large free spanning roof covering the office and parts of the car park exterior.  The ground floor offers very comfortable public toilets, a baby changing facility and several pay stations.  Two elevators serve all parking levels. All in all the sophisticated car park concept, which takes into consideration the needs of the user and the owner and operator, represents a sustainable quality product.  Thanks to the use of first-class materials its longevity is a given.