The new MSCP in Amsterdam Noord, contracted by the housing association “De Alliantie”, is part of the city’s rejuvenation project in the former port- and industry district in the north of Amsterdam. Together with its “Sister MSCP” – with almost identical dimensions and size – which HUBER will build in the summer of 2021, it covers the parking needs of 550 new flats in the planning area of Cityplots. The car parks are on the edge of the residential area, so as to ensure light traffic within. The residential area itself will only be accessible for pedestrians or cyclists.

As the car park is closely linked to the residential area, the district transformer and heating stations for the flats have been installed in the ground floor. You will also find a doctor’s surgery with treatment rooms and a pharmacy in the ground floor, the glass façade of which is very inviting to the passers-by. The parking decks reach a height of 18 meters via a flat parking ramp. Photothermal elements have been installed on the roof surface, which due to the weight demands was built with additive decking, and the energy converted feeds into the district heating system.

Due to the challenging architecture of the area (“Studio NineDots”/Amsterdam) and the direct link between the car park and the residential area, the expressive design of the champagne-coloured pyramid façade was developed by “XVW architectuur”. The majority of the surface consists of pyramids with measurements of 2.25m x 2.25m and a “height” of 250mm. In certain areas four small pyramids have been installed onto the surface. Particularly in sunshine the vividness and colour of the façade come into their own. Technically, the façade was a challenge both in production and assembly. HUBER worked closely with RMIG, who optimised the four triangles, out of which each pyramid was put together on site, in their 3D-Model. 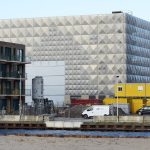 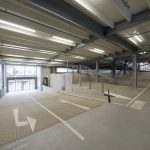 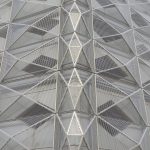 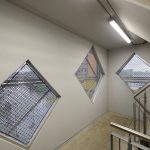 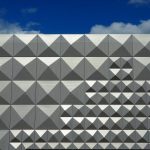 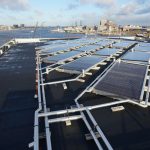 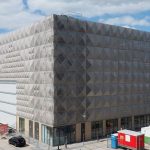 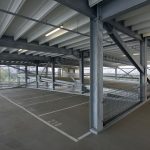 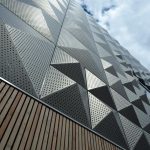 Due to the high fire protection requirements of the Amsterdam fire brigade, it was necessary to put “Quick-Response” sprinkler heads on all parking decks. The pump chamber and water tank were installed in the narrow area under the first parking deck. In order to assure the required 60 minute fire extinguishing time, a water connection with a water flow capacity of 60m³/hour was necessary, despite the 60m³ water tank.

The entry system works solely with mobile phone. Each user of the preassigned parking bays can manage up to 10 authorised number plates online via a portal. The opening of the speed folding gates is enabled by number plate recognition and a card reading device for vehicles; the same system also applies for the preassigned motorbike bays; in the case of pedestrians, the entrance door will open automatically once the entrance number has been dialled.